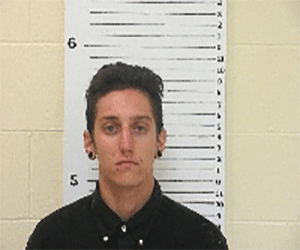 A Kearney man was arrested after he and a runaway juvenile were contacted by North Platte Police.

On August 10, at 3:52 AM, officers responded to a business in the 1300 block of S Dewey St in regards to suspicious activity.

The caller advised that two transients were sleeping in the parking lot and had been asked to leave but they refused.

Officers made contact with 21 year old Cameron Wells, who is from Kearney but it currently homeless, and a 16 year old female who had been reported as a runaway from Franklin County, Nebraska.

The runaway was found with drug paraphernalia commonly used to consume methamphetamine in her hand and she was arrested and taken to the police station to be turned over to a probation officer.

Wells was arrested for contributing to the delinquency of a minor, and a search incident to arrest revealed brass knuckles, less than an ounce of marijuana, and baggies with suspected residual methamphetamine in them amongst his belongings.

Wells was incarcerated at the LCSO jail on suspicion of contributing to the delinquency of a minor, exposing methamphetamine to a child, possession of a deadly weapon by a felon, and carrying a concealed weapon.

The pipe and the residual methamphetamine was sent to the NSP laboratory for drug analysis, and further charges for both subjects are pending those results.

Click HERE to view the most recent obituaries and service times from our funeral home partners.

North Platte Post is honored to publish full obituaries and photos at no cost to families.