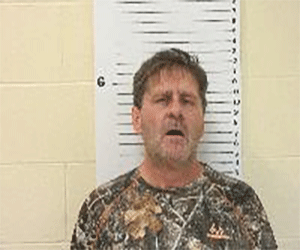 A 58-year-old North Platte man is in jail after officers responded to disturbances at the same residence three different times in the same evening.

According to police, officers responded to the 1000 block of Autumn Park Drive at around 3:45 pm on the report of a disturbance.

Officers made contact with Mark Howard and two other subjects.

Officer Beth Kerr says as officers attempted to speak to Howard, he continued to scream and curse at the other subjects.

Officer Kerr says the other subjects were explaining to officers that Howard was upset with them over a complaint that he was playing his music too loud.

Following further investigation, Kerr says Howard was issued a citation for disturbing the peace and officers left the area.

At around 5:30 pm. officers were dispatched to the same location after police say Howard made a call to 911 and began screaming at dispatchers over the phone.

Officers made contact with Howard, who Kerr says was now highly intoxicated, and were able to calm him down and explain to him that he could not call 911 unless there was an emergency.

Officers again left the area, however, at around 7:00 pm, Kerr says officers responded to the area once again after receiving a report that Howard was screaming and throwing things outside.

As officers arrived, Kerr says they observed Howard throw a table across the lawn and determined that he needed to be placed under arrest.

After Howard was handcuffed, Kerr says he scuffled with officers, causing minor injury to one of them.

He was eventually subdued and transported to the Lincoln County Detention Center where he was jailed on suspicion of two counts of disturbing the peace, resisting arrest and assault on a police officer.

According to jail records, Howard has bonded out.