John L. was born on December 21, 1940 to John Jacob and Estella Agnes (Jackson) Schurr in Farnam, Nebraska, where he grew up on the family farm.  John graduated from Farnam High School in 1958, then attended the University of Nebraska and Colorado State University until the death of his dad in 1960 brought him back to work on the farm.  In 1961, he started raising purebred Angus cattle and farming with his brother, Jerry.   Then in 1983, they added a purebred Charolais herd to the ranch.

On April 4, 1965, John married Kay Schultheiss in North Platte.  The couple lived west of Farnam and had three sons, all who became part of the Schurrtop Angus and Charolais Ranch, which has been a farming, cattle feeding, and purebred operation going on for four generations.  John was proud that each son earned national recognition on livestock judging teams.

John had a great love for cattle, and over the years served on numerous committees in the Angus and Charolais breeds.  He served two terms on the American Angus Association Board of Directors, was on the Certified Angus Beef Board, a member of the Angus Foundation, Past Director of the Nebraska Angus Association, and Director of Farm Credit Services.

Schurrtop has been recognized in competitions including the National Western Stock Show in Denver, Colorado, where he exhibited his cattle for 50 consecutive years, the Great Western Beef Expo and Beef Empire Days in Kansas where they won the coveted Brookover Award.  John has been recognized with numerous awards over the years and was selected as Nebraska Angus Association 2010 Producer of the Year.  He had a true passion for cattle feeding and believed in letting the merits of his cattle do the talking.

Along with his work, John was also active in the Farnam community where he served on various borads for school, church, and the Gothenburg Hospital Foundation.  He was a 4-H Club leader for 35 years and a member of Trinity Lutheran Church in Gothenburg, Nebraska.  He was also a member of the Cattlemen's Beef Association, Nebraska Cattlemen, and the Colorado Livestock Association.  He will be remembered for his work across the beef industry.

His is survived by his wife, Kay, of Farnam, Nebraska; sons, Mary Schurr and his children, Adalyn and Gavon, all of Maywood, Nebraska and Ryan (Kari) Schurr and their children, Luke and Reese, all of Farnam; his brother, Jerry Schurr of Farnam; his sister, Janet (John) Speck of St. Paul, Nebraska; brother-in-law, Dean (Marcia) Schultheiss of Orange, California; sisters-in-law, Rose Ann Young of Martinez, Georgia and Virginia (Jerry) Kasha of Canton, Georgia; as well as other family.

John was preceded in death by his son, Wayne; his father, John; his mother and step-father, Estella and LeRoy Tillotson; and a sister-in-law, Linda Schurr.

Funeral service will be held at 11:00 a.m. on Wednesday, January 8, 2020 at Trinity Lutheran Church, 2002 Twenty-Seventh Street in Gothenburg, Nebraska.  Burial will be in the Maywood Cemetery in Maywood, Nebraska at 3:30 p.m. followed by a gathering in the Maywood Community Hall.  Visitation will be on Tuesday, January 7, 2020 from 9:00 a.m. to 7:00 p.m.  with the family greeting friends from 5:00 - 7:00 p.m. at Odean Colonial Chapel, 302 S. Sycamore Street in North Platte, Nebraska.  Online condolences may be shared at odeanchapel.com.  In lieu of flowers, memorials will be used for local organizations in the Farnam/Maywood communities.  Odean Colonial Chapel at C & Sycamore in North Platte is in charge of arrangements. 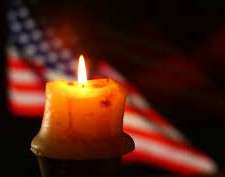 Charles H. Grigsby, age 93, of North Platte, died December 29, 2019 at Linden Court.   Graveside services will be 11:00 a.m. Tuesday January 7, 2020 at Fort McPherson National Cemetery near Maxwell with Masonic Rites and Military Honor guard graveside.  Visitation will be Monday from 12-5 p.m. at Adams & Swanson Funeral Home, which is in charge of arrangements.