Huskers' Spielman out for spring to deal with health issue

LINCOLN, Neb. (AP) - Nebraska receiver JD Spielman has gone home to deal with an unspecified health matter and probably will miss all of spring practice.

"Everyone's focus right now is on JD's well-being and providing him with the appropriate support," coach Scott Frost said Monday. "We anticipate JD returning to the team in time for summer conditioning."

Spielman is from Eden Prairie, Minnesota, and going into his senior year. He led the Cornhuskers with 49 catches for 898 yards and five touchdowns last season. He's the first Nebraska player with three 800-yard receiving seasons.

Nebraska also announced kicker Barret Pickering and receiver Jaevon McQuitty are leaving football, and walk-on kicker Matt Waldoch has left the team to focus on academics. Pickering and McQuitty had been injured. 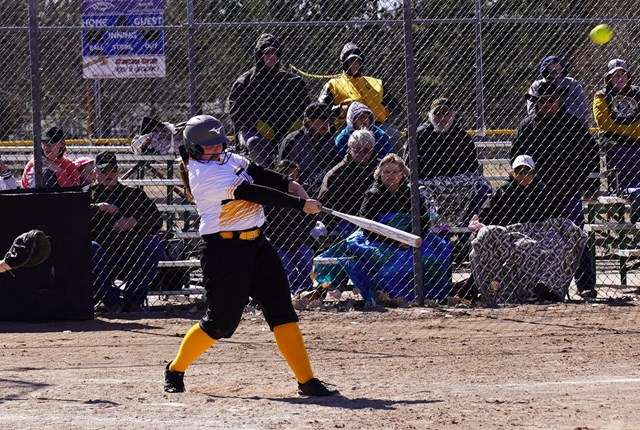 Just like the later game Saturday, NPCC found themselves in a big hole early to start the day. The Knights scored first after a leadoff triple by Brittany Bui, of Lakewood, Co. But Northeast CC came firing back, scoring three runs in the second inning and four in the third.

The Knights bats came alive in the bottom of the third though as they scored nine runs in the inning to take a 9-7 lead into the fourth inning. NPCC added a run in the fourth and fifth innings, followed by another huge offensive output in the sixth inning which saw the Knights score another five runs.

NPCC held off a late run by the Hawks in the seventh inning to come away with the 17-12 win. Taylar Coleman, of North Platte, picked up the win after pitching five and a third innings while allowing three earned runs on seven hits. Coleman finished with four strikeouts and two walks.

Offensively, the Knights were dominate throughout the entire lineup. They were led by Megan Hernandez-Below, of Broomfield, Co., who finished the game two for three with two doubles and three runs batted in. NPCC finished the game with 18 hits compared to nine for Northeast CC.

The second game was another dominating pitching performance for NPCC. Chloe Sutherland, of Portland, Or., picked up the win for the Knights after going three and a third innings while giving up just one earned run on four hits. Sutherland finished with five strikeouts and just one walk. Coleman entered the game in relief and pitched three and two thirds innings of scoreless ball. She finished with three strikeouts and no walks.

After falling behind 1-0 in the first inning, Sienna Pfaff, of Salem, Ut., brought the crowd to their feet with a grand slam in the second inning. The Knights led 6-1 after two innings. NPCC added two more runs in the third inning which turned out to be the final runs of the game as the Knights won 8-1.

Along with Pfaff, Domonique Contreras, of Brighton, Co., helped lead the Knights from the plate as she finished three for three with one run batted in and a stolen base.

"It was great to get four wins this weekend, and to see our team fight for all four," said coach Janelle Higgins. "It's still very early in the season but the fixes we are seeing as a coaching staff are certainly fixable. Our athletes fought hard and showed we can come back and win."

After finishing the weekend 4-0 against Northeast CC, NPCC improves to 4-4 on the season. Thursday's scheduled games against Hastings College have been postponed so the Knights next play at Northeastern Junior College Friday, March 6.