Hoiberg statement on coaching with the flu 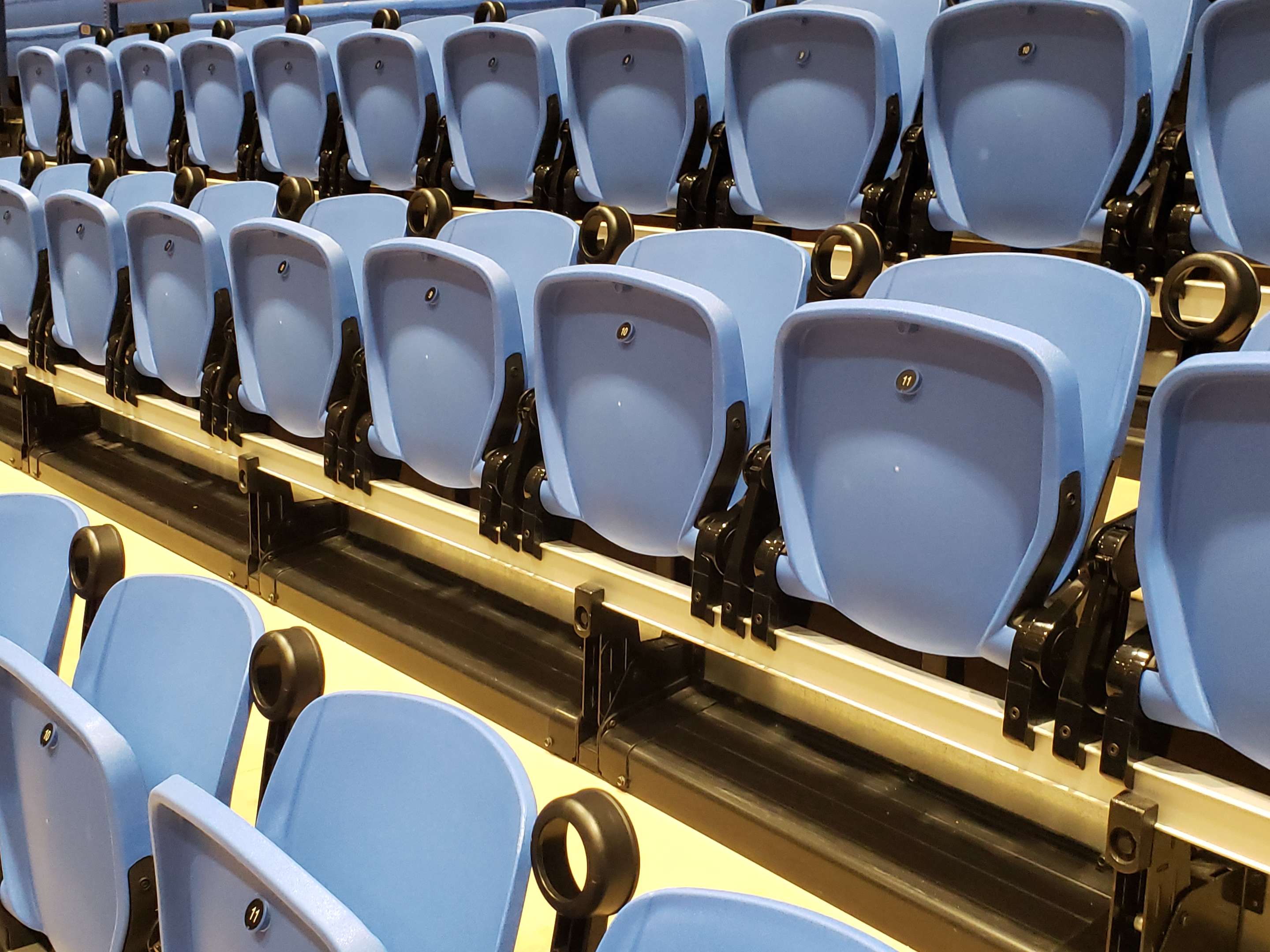 The Latest on the coronavirus outbreak's affect on sports around the globe (all times EDT):

NCAA President Mark Emmert says NCAA Division I basketball tournament games will be played without fans in the arenas because of concerns about the spread of coronavirus.

Emmert said in a statement Wednesday he made the decision to conduct both the men's and women's tournaments, which begin next week, with only essential staff and limited family in attendance.

NASCAR and IndyCar plan to race as scheduled this weekend, with IndyCar continuing to move ahead with its season-opening race through the streets of St. Petersburg, Florida.

The three-day downtown street festival draws about 130,000 people. There will be additional hand-washing and sanitizing stations.

NASCAR will race at Altanta Motor Speedway, but said officials Wednesday all driver interviews will be done with the drivers either on risers or with 6-foot buffers around them. The pre-race driver meeting will be held in open-air locations and attendance will be restricted to drivers, crew chiefs, team owners and select officials and dignitaries.

The promoters of the Long Beach Grand Prix, scheduled for April outside of Los Angeles, said Wednesday the race is still planned.

Roger Penske, readying for his first Indianapolis 500 as owner of the race, told The Associated Press by text message he's approaching the scheduled May 24 race "day by day" while noting the 500 is nearly 90 days away.

A global esports league with teams in North America, Europe and Asia is canceling all matches through March and April because of the coronavirus pandemic.

The Overwatch League launched an ambitious home-and-away schedule for its 20 franchises in February but already had postponed all events in China and South Korea due to the outbreak. The league announced the latest cancellations in a statement Wednesday.

The league's players come from countries around the globe. OWL says it is "considering the various options available to esports."

Blizzard Entertainment, which operates the Overwatch and Call of Duty Leagues, said scheduling considerations also are being addressed for the latter.

The World Figure Skating Championships set for next week in Montreal have been canceled due to public health concerns related to the spread of the new coronavirus.

The event was scheduled to bring nearly 200 skaters from more than 50 countries to Montreal. It is the premier competition of the skating season in non-Olympic years. It is scheduled for Stockholm next year.

On Saturday, the Women's World Hockey Championships in Nova Scotia were called off.

Nebraska is the latest state to limit attendance or cancel a state high school championship tournament.

The Nebraska boys' basketball tournament will be played as scheduled Thursday through Saturday, but the only fans allowed into the venues will be participants' immediate families.

The Lincoln and Lancaster County Health Department recommended limiting spectators because of concern about the spread of coronavirus. Health officials announced this week that a Crofton High School student who attended the girls' tournament in Lincoln last week was diagnosed with COVID-19.

Ohio announced that only participants' families and media will be allowed to attend winter sports postseason tournaments.

Connecticut has canceled the remainder of its winter sports seasons as well as state tournaments.

Boys' and girls' basketball tournaments in New York and Pennsylvania have been disrupted because several schools have declined to host games, forcing them to be rescheduled.

Ohio Gov. Mike DeWine said he will be issuing an order regarding "mass gatherings" due to the coronavirus that will affect NCAA Tournament games in Cleveland and Dayton.

DeWine says the order will include banning spectators from games and that he'll be asking people to make "informed decisions."

During a news conference Wednesday, DeWine said he will issue an order in the next 24 to 36 hours. Dayton will host the NCAA's First Four next week at Dayton Arena, and first- and second-round games will be held in Cleveland's Rocket Mortgage FieldHouse.

"The order will be that there cannot be spectators there," DeWine said. "There certainly will be people - there will be TV people, there can be radio people there, there can be sports writers, certainly can be the media there. But we're not going to have the large crowd."

DeWine applauded the Mid-American Conference for closing its tournament games to the general public this week.

A Division III college athletic conference in the northeastern United States has canceled its conference schedule for the spring season.

The New England Small College Athletic Conference says the decision comes as many NESCAC schools have told students to return home and to complete the semester remotely because of the spread of the coronavirus.

The decision relates specifically to the conference regular-season and championship schedules. It does not discuss nonconference play.

Skiing officials have called off the last races of the women's Alpine skiing World Cup because of public health concerns related to the spread of the coronavirus.

The decision to call off the three-day event in Are, Sweden, hands Federica Brignone of Italy the overall title and denies Mikaela Shiffrin a return to racing this season.

Brignone becomes the first Italian women's overall champion in the 53-year history of the World Cup.

Shiffrin, the defending overall champion, had announced earlier Wednesday that she would compete at the event after taking a six-week break from the sport following the death of her father.

During her absence, Shiffrin lost her lead in the overall standings to Brignone, who is 153 points ahead of the American. There would have been a total of 300 points up for grabs in the last three races.

Next week's World Cup finals for both women and men in Cortina d'Ampezzo already had been canceled because of the virus outbreak in northern Italy.

The Fed Cup finals have been postponed indefinitely in response to concerns about the spread of the new coronavirus.

The 12-team women's tennis tournament was set to be played April 14-19 in Budapest, Hungary. The International Tennis Federation said it still hopes to stage the event in 2020, but did not announce a date.

The Fed Cup serves as a qualifying event for the Olympics and the ITF said it "is working closely with the IOC to address any impact this may have on athlete eligibility" for the Tokyo Games.

All playoff matches between lower-ranked teams, which were set to be played in eight locations around the world, were also postponed.

ITF President David Haggerty said "we are extremely disappointed to have to make this decision, but we will not risk the safety and welfare of players, captains, event staff or spectators."

The Fed Cup finals features a new format this year with 12 teams competing in four groups before a knockout phase. The United States is set to play Spain and Slovakia in Group C.

An exhibition baseball game in San Francisco between the Giants and Oakland Athletics has been canceled because of the virus outbreak.

The Bay Area teams were set to play at Oracle Park on March 24. That was two days before the start of the regular season in Major League Baseball.

The announcement came Wednesday after the San Francisco mayor banned gatherings of 1,000 or more people.

San Francisco is banning all large gatherings of more than 1,000 people for the next two weeks and the Golden State Warriors intend to play at least one home game without fans.

Mayor London Breed announced the ban Wednesday. She says she understands the order "is disruptive, but it is an important step to support public health." She says the Warriors are in support of the efforts, and the team announced it would host the Brooklyn Nets on Thursday night with no fans, making it the first NBA game set to be played in an empty arena.

The Warriors' next home game after that is March 25 against Atlanta.

Golden State also said all events through March 21 would be canceled or postponed. The G League Santa Cruz Warriors were set to host the Austin Spurs on Saturday, but that will be moved to Santa Cruz.

The Mariners will move home games from Seattle through end of March following the state of Washington's decision to ban large group events in response to the coronavirus outbreak.

Seattle had been scheduled to open the season at Safeco Field with a four-game series against Texas from March 26-29, then host Minnesota in a three-game series from March 30 through April 1.

The Mariners say they are working with the commissioner's office on alternative plans.

Washington Gov. Jay Inslee on Wednesday announced a ban on all large gatherings in the three counties of the Seattle metro area through at least the end of March.

That decision affects the Seattle Mariners' first seven games of the season, when they host the Texas Rangers and Minnesota Twins. It also applies to home games for the MLS Seattle Sounders, XFL Seattle Dragons and a pair of junior hockey teams in the area.

The restrictions do not include Spokane, where NCAA Tournament games are scheduled to take place next week. The men's first and second rounds are being played at the Spokane Arena, while early rounds of the women's tournament could end up being played on campus at Gonzaga.

Stanford is still willing to host the NCAA women's basketball tournament with a strict limit on spectators if selected to do so next week.

The school in Northern California said Wednesday that all sporting events on campus will be closed to the public through May 15 or until further notice in response to the spread of the new coronavirus.

Only participants, coaches, working staff, officials, credentialed media and a very limited number of family members, friends and guests of the competing teams will be allowed to attend. Santa Clara County announced a ban earlier this week of gatherings of more than 1,000 people.

The seventh-ranked Cardinal were expected to be picked as a host for the tournament that starts March 20. The top 16 teams are picked as hosts of the opening two rounds.

The NCAA didn't immediately respond to a request for comment.

One of college basketball's postseason invitational tournaments has been canceled.

Organizers of the College Basketball Invitational, widely known as the CBI, say they've decided to cancel this year's event because of the "uncertainty about the coronavirus and the impact it is having on college campuses across the country."

The tournament is played at campus sites for teams that aren't invited to the NCAA Tournament or the NIT.

The statement issued Wednesday says officials look forward to bringing back the CBI in 2021.

The director of the National Institute of Allergy and Infectious Diseases told a congressional committee Wednesday that he would recommend the NBA not allow fans at games in response to the coronavirus.

That answer by Dr. Anthony Fauci came hours before NBA owners are scheduled to meet to discuss the next steps in responding to the growing concern about the virus.

Fauci was responding to a question from Rep. Glenn Grothman, a Wisconsin Republican, during a meeting of the House Oversight Committee. Grothman asked, "Is the NBA underreacting or is the Ivy League overreacting?" He was referencing how the Ivy League recently canceled its basketball tournaments, instead of having them played without fans in attendance or keeping the status quo.

"We would recommend that there not be large crowds," Fauci said. "If that means not having any people in the audience when the NBA plays, so be it. But as a public health official, anything that has crowds is something that would give a risk to spread."