Police in Kansas City, Missouri, say at least two people are dead and upwards of a dozen people may have been injured in a shooting outside a bar.

Police say the shooting took place just before midnight, when someone opened fire on a line of people waiting outside. A man and a woman were found dead at the scene. Police believe the man was the shooter, who was shot by an armed security guard.

At least 15 people arrived at local hospitals with injuries and three are in critical condition.

The bar appeared to be celebrating the Kansas City Chiefs' advancement to the Super Bowl. 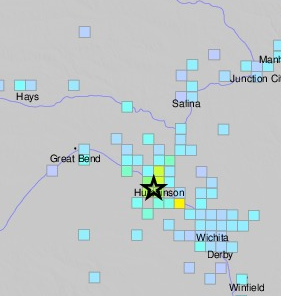 The 4.4-magnitude quake was recorded at 1:08 p.m. Sunday, and was felt  as far north of Hays, according to social media reports.

The epicenter of the quake was just southwest of Hutchinson, the USGS reported.

The Hutchinson police department reported they received numerous phone calls about the quake but have no reports of damage or injury.