The provider was working last weekend and had contact with 10 patients, the hospital said in a news release. The families of the patients and hospital staff members who came in contact with the provider have been informed. The hospital didn't say whether the infected person is a doctor or has some other role, and it didn't give the person's sex or age. A hospital spokeswoman, Sarah Weller, also declined to give that information.

The provider was tested when he or she developed symptoms early this week and is now isolating at home, the hospital said. The news came a day after health officials reported that Nebraska has had 64 confirmed cases of COVID-19, the disease caused by the coronavirus. The state hasn't reported any deaths yet.

For most people, the coronavirus causes mild or moderate symptoms, such as fever and cough that clear up in two to three weeks. For some, especially older adults and people with existing health problems, it can cause more severe illness, including pneumonia, or death. 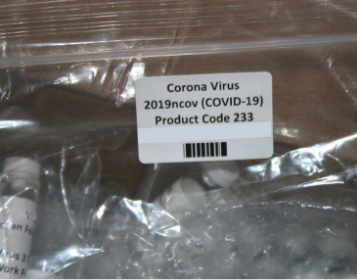 Attorney General William Barr says the Justice Department has already launched investigations into people who are hoarding supplies and price gouging.  Barr says, “If you are sitting on a warehouse with surgical masks, you will be hearing a knock on your door."

As the coronavirus pandemic spreads, so too do the crimes related to it — transgressions that capitalize on fear, panic and the urge to lay blame, and add to the burden on law enforcement agencies trying to protect vulnerable citizens.

“It is really disheartening in a time like this that someone would take advantage of the community and take them in a time of need,” Tucson, Arizona, Police Sgt. Pete Dugan said.

Everyday life has essentially stopped in many countries in a bid to slow the virus, and some crimes have been declining. But reports of virus-related fraud are on the rise, along with concerns about hate crimes.

U.S. President Donald Trump and others have taken to calling the virus the “Chinese coronavirus,” even as scientists say the disease has nothing to do with Asian ethnicity. But the president dismissed the idea that his comments could fuel hate crimes.

“It’s not racist at all,” Trump has said.

In Los Angeles, a 16-year-old boy of Asian descent said other students bullied him and accused him of carrying the virus. In New York, a man on the subway sprayed an Asian passenger with Febreze and verbally abused him. State Attorney General Letitia James set up a hotline for New Yorkers to report hate crimes in the country’s outbreak epicenter.

The Anti-Defamation League, which tracks hate groups, blames the virus for elevating racist and anti-Semitic messages, including suggesting that Jews are somehow responsible for the pandemic. Some hate groups have suggested tainting doorknobs or other surfaces with the virus so FBI and police officers fall ill.

“If any of you get this, I expect you to spend as much time as possible with our enemies,” one wrote.

Hundreds of masks have been stolen in Portland, Oregon, amid shortages for health care workers. A Missouri man who was coughing told two store clerks he had a high fever. He was arrested after police said he threatened to give the employees coronavirus. People in Pennsylvania and Illinois were accused of similar crimes. Texas prosecutors brought charges against someone who falsely claimed on social media to have tested positive for COVID-19.

In a memo issued Tuesday, Deputy Attorney General Jeffrey Rosen told prosecutors they could charge people who threaten to spread the new coronavirus under U.S. terrorism statutes because the Justice Department considers it a “biological agent” under the law. In such cases, suspects could be charged with a number of offenses, including possessing or developing a biological agent as a weapon, he said.

“Threats or attempt to use COVID-19 as a weapon against Americans will not be tolerated,” Rosen wrote in the memo to U.S. attorneys across the country and the heads of all Justice Department agencies, including the FBI.

Meanwhile, police in Bowie, Maryland, are investigating reports of a man wearing an orange vest and blue surgical mask who approached people at two homes claiming to be inspecting for coronavirus. He actually entered one home before a resident confronted him. A similar scam was sweeping through Germany.

The World Health Organization and other authorities are also working to debunk spurious claims about possible cures. They include false assertions that silver, bleach, and garlic could protect against the coronavirus, or that bananas prevent it.

In Uganda, the parliament speaker endorsed a businessman who said he had discovered a chemical that “instantly kills” the virus. Speaker Rebecca Kadaga announced that the businessman had offered to produce the “treatment” in Uganda and it would go on the market shortly.

Kadaga’s comments were widely mocked because the product is actually a disinfectant, according to the Ugandan firm that will produce the chemical, not to be ingested.

“We have already seen fraudsters using the COVID-19 pandemic to scam people looking to buy medical supplies online ... and targeting people who may be vulnerable or increasingly isolated at home,” Graeme Biggar, director general of the National Economic Crime Center in the U.K., said in a statement.

In the U.S., the Justice Department created a central fraud hotline (1-866-720-5721 or [email protected]) and has ordered U.S. attorneys to appoint special coronavirus fraud coordinators.

Meanwhile, marketing schemers have quickly pivoted to offering “senior care packages” that include hand sanitizer or even a purported vaccine, which doesn’t exist. Some falsely claim that Trump has ordered that seniors get tested.

It’s all a trick to get personal information that can be used to bill federal and state health programs, health officials said.

“It’s a straight-up ruse to get your Medicare number or your Social Security number under the guise of having a test kit or a sanitary kit sent to you,” Christian Schrank, assistant inspector general for investigations at Health and Human Services.

The worldwide outbreak has sickened more than 350,000 people and left more than 15,000 people dead. For most people, the virus causes only mild or moderate symptoms, such as fever and cough. For some, especially older adults and people with existing health problems, it can cause more severe illness, including pneumonia.

The World Health Organization says criminals are increasingly posing as WHO officials in calls and phishing emails to swipe information or money. The United Nations also set up a website to help prevent fraud.

But the warning came too late for an 83-year-old woman in Mannheim, Germany, who was convinced by scammers to hand over a five-figure sum, claiming it was for a relative who had fallen ill. Police, who would not give an exact figure on the stolen euros, said the woman was told that a driver would pick up the money from outside her front door, to avoid possible infection.

By the time she got suspicious, the money was gone.